From Unkle Wiki
Jump to navigation Jump to search

The following are good sources for finding information on gigs:

As well as old magazines such as Muzik which have gig listings in the back. When creating a page for the individual gig it's always best to have some sort of source to refer back to so your work can be confirmed.

Obviously a lot of the information on Setlist.fm and Songkick etc. is user submitted so it could be wrong, and the information on Resident Advisor and in magazines doesn't take in to account whether the gig went ahead (eg. cancelled or postponed). --Titwsl (talk) 01:50, 30 September 2018 (UTC) --Jimmyjrg (talk) 15:41, 26 April 2020 (AEST)

There's a stack of events which have flyers, but no dates. Such as Flip & Trip, No Half Steppin', KUDO, and The Return of Kudo. 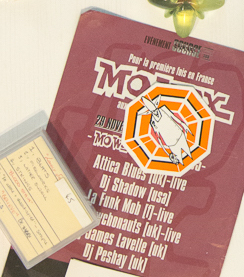 According to DJ Shadow, Lavelle used to DJ in LA frequently around 1991: "He often came to LA to do these Acid Jazz nights, with Orlando Aguillen doing Brass and LA Brass nights. James came to mix at their parties and he had to come twice to Los Angeles when Orlando played the piece of Zimbabwe Legit I had done for Hollywood Basic."